Indore City is known for its scenic beauty and it also houses many ancient temples, monuments, market places, parks, zoological gardens etc. Locals as well as tourists could explore the surrounding areas of Indore as fascinating weekend getaways. Here are the list of fabulous tourist places around Indore which lies within 300 km of the city. These places are:

Bhimbhetka is surrounded by the north Vindhyan Range and is located in the middle of dense forest. The place is 177 km away from Indore City and is about 46 km south of Bhopal. The place is an offbeat weekend destination from Indore city with more than 600 rock shelters or caves of Neolithic age. The caves have been discovered recently.

Through these paintings that were done using colors described the daily lives of the pre-historic cave men in detail. Visitors could get to see the history of man through these panoramic cave paintings. The daily activities of the cave men i.e. dancing, hunting, elephant riding, animal fighting, body decoration and other household activities. 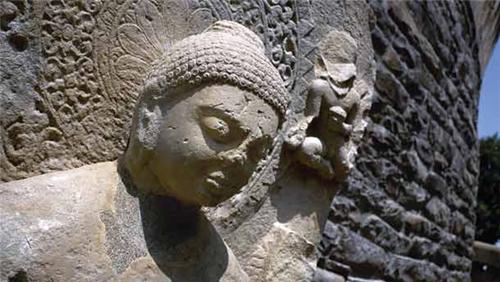 Many animals like bison, tigers, lions, wild boar, antelopes, crocodiles etc are also depicted through these paintings. Rituals and popular ceremonies of that time got depicted through these paintings as well. Natural phenomenon and childbirth are also drawn in these caves. The paintings have been divided into 7 periods. They are Upper Palaeolithic, Mesolithic, Chalcolithic, Early Historic and Medieval period. 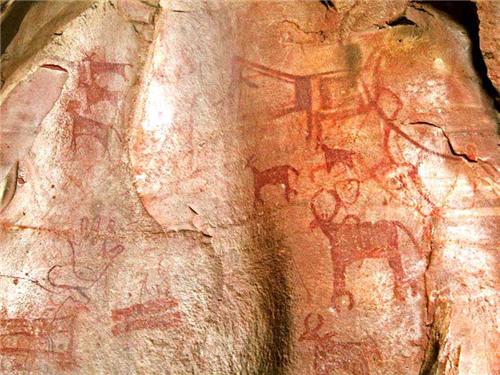 How to Reach Bhimbetka from Indore:

By Air: The nearest airport of Bhimbetka is Bhopal so people from other parts of the country can reach Bhopal Airport and then take a cab or private taxi to reach Bhimbetka.

The best time to visit Bhimbetka is between the months of July to March.

Mandu is a place that is known for the eternal love of Prince Baz Bahadur and Rani Roopmati. These royal lovers are still remembered by the balladeers of Malwa Hills. Baz Bahadur’s palace is a showcase of Afghan architecture. The lakes and palaces of Mandu located among the beautiful natural landscapes keep attracting visitors from all over the world. Mandu is located at an altitude of 2000 feet from the sea level. During the Mughal Rule, this place was treated as a pleasure resort.

The glory of Mandu is still mentioned in songs and legends. The various outstanding structures of Mandu are Jami Masjid and Tomb of Hoshang Shah. In local dialect Mandu means “City of Joy”. 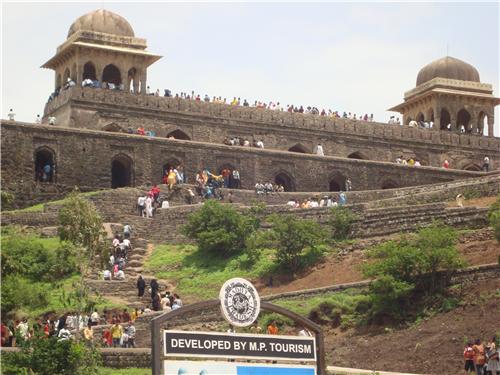 Other places to Visit in Mandu:

The Darwazas in IndoreThe Darwazas are 45 km parapet of walls surrounding Mandu and the most important of all is the Delhi Darwaza that is the main entrance of this fortress city. The other entrances are Rampol Darwaza, Jehangir Darwaza, Tarapur Gate etc.

The Royal Enclave Jahaz Mahal
This is palace built in the shape of a ship and is located between two artificial lakes Munj Talao and Kapur Talao.


Roopmati’s Pavilion:
This was built as an observation post for the army. A retreat in true terms, the hilltop perch was used by Rani Roopmati to see Baz Bahadur’s   palace and River Narmada flowing through the plains.

The temperature rises very high during the summer season and winters are chilly. The best time to visit Mandu is between July to March.

How to Reach Mandu:

Mandu could be reached by road, rail and air:

By Road: There are regular bus services to Mandu from cities like Indore, Ratlam, Ujjain, Bhopal and Dhar.

By Train: Train services are available from various places to Mandu. The nearby railway stations are Ratlam( 124 km away from Mandu) and Indore Junction ( 99 km from Mandu).

By Air:  The nearby airport is Indore that connects Mandu with other important cities like Delhi, Bhopal, Gwalior, Mumbai etc.

Ujjain is located on the banks of Shipra River and is considered as one of the most sacred places of India. The place was earlier known as Ujjaini. According to the Hindu Mythology, when the demons and the gods were fighting over the bottle of nectar that came out during the churning of the Ocean by the Gods and the Demons, few drops of nectar fell at Ujjaini, Prayag, Nasik, and Hardwar.

Due to this nectar, the water of Shipra is considered as holy water. The other tourist places of Ujjain are listed here. 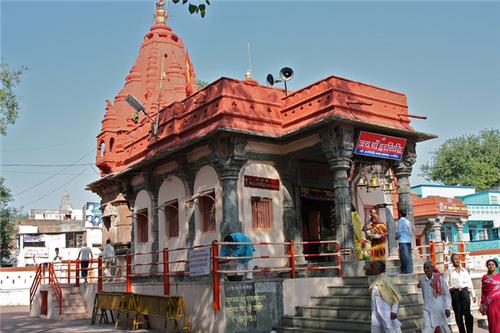 Bade Ganeshji Ka Mandir :
A temple dedicated to Lord Ganesha. The size and beauty of this idol is unparalleled. An idol of five faced Hanuman is installed in the middle of the temple.

Bhartrihari Caves:
Located on the banks of River Shipra, these caves are near temple Gadkalika. According to the legends, the step brother of Vikramaditya, Bhartrihari, lived and mediated. Bhartrihari is known to be a great port and scholar.

Kaliadeh Palace:
This palace is located on the banks of Shipra River. The glorious surrounding of this palace along with the man-made channels and tanks make this place awe inspiring. The central dome of the palace is inspired by the Persian Architecture.

The other interesting places in Ujjain are-

How to Reach Ujjain from Indore:

Ujjain is well connected to important places of Madhya Pradesh like Bhopal, Indore, Mandu, Omkareshwar etc by road and rail both.

By Road: There are regular bus service connecting Ujjain with Indore, Bhopal Ratlam, Gwalior and other places of Madhya Pradesh.

By Train: Ujjain is an important railway station of Western Railways on the Bhopal-Nagada sector.

By Air: The nearest airport is Indore which is about 55 km away from Ujjain. Flights to Bhopal, Mumbai, Gwalior, Delhi etc can be taken from here.

The best time to visit Ujjain
Ujjain can be visited any time of the year for its pleasant weather.

A place that has derived its name from the holiest word of the Hindus “Om”, Omkareshwara is an island shaped like the holiest symbol Om. River Narmada and Kaveri confluence here and devotees flock here to offer their prayers. One of the 12 Jyotirlingas are located here at the Shri Omkar Mandhata Temple.

The island has two hills and there is a valley in between. There is a cantilever bridge and about 270 ft below the bridge River Narmada flows surrounded by the Vindhya Hills on the North and the Satpura Hills on the South. The bridge adds to the picturesque beauty of this place. 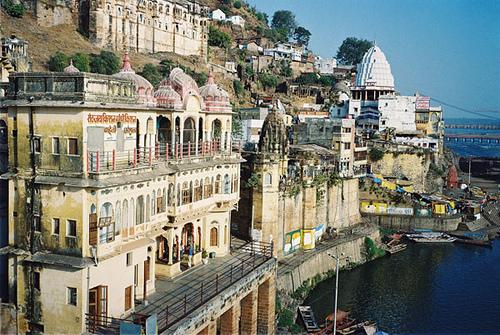 The various places to visit in Omkareshwara are


A temple mounting on an island. The architecture of the temple is fabulous with verandahs having columns shaped like circles, polygons and squares.

Siddhanta Temple:
This is the example of Brahminic architecture of early medieval age. 24 Avatars are the clusters of Hindu and Jain Temples. Satmtrika Temple and Kajal Rani Cave are some of the interesting places of religious importance surrounded by breathtaking natural beauty are located in and around Omkareshwara.

The Best Time to Visit Omkareshwara:

The best time to visit this place is July to March.


How to reach Omkareshwara from Indore:

Omkareshwara can be reached from various other places of Madhya Pradesh and few places of adjoining states through rail, road and air very easily.

By Road: Omkareshwara is only 77 km away from Indore and is well connected through bus services from Indore, Ujjain, and Khandwa.

By Train: The nearest rail station is Omakershwar Road, 12 km away from Omkareshwar, located on Ratlam-Khandwa section of the Western Railways.

By Air: The nearest airport being Indore, people could get flights to other places like Bhopal, Mumbai, Gwalior, Delhi and others.