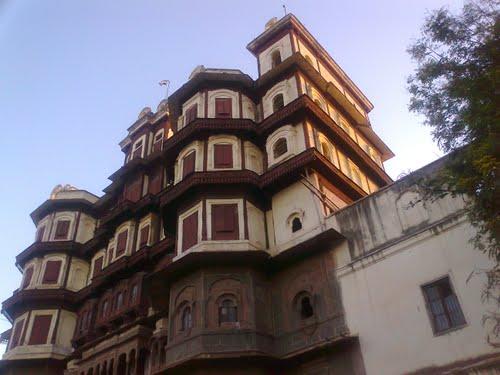 Indore City of Madhya Pradesh is known for its industrialization and is considered as an important commercial hub of not only Madhya Pradesh State but for the entire India but one cannot ignore the rich cultural heritage the city bears. There is a perfect harmony of old traditions of India as well as modern commercialization in this one of the busiest and the largest cities of Madhya Pradesh.

There are stunningly designed monuments and palaces that still bear the evidence of rich tradition of our rulers especially the Holkar Rulers of Madhya Pradesh. 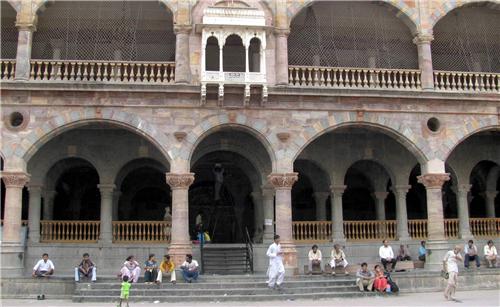 Rjawada Palace is one of those rare monuments that stand as the symbol of rich heritage of Indore, one of those cities of Madhya Pradesh that has become synonymous to the Indian History. Every nook and corner of this palace silently witnesses the glory of the Holkar Dynasty, the dynasty that ruled a vast part of Madhya Pradesh and whose rulers are known for their gallant and patronage for architecture and cultural advancement.

Whether a person has interest in history or not, Rajwada Palace has the unique capability to draw the attention of every visitor who steps into the premise of this grand monument built by the Holkars dated two centuries back. Located near the Chhatris, this grand building with seven storeys still bears the testimony of royal architectural tastes and opulence.

History of Rajwada Palace in Indore:

They worked for the Mughals but settled down in Malwa along with their families. The palace was burnt three times and the maximum destruction was done during 1984 riots. The lower three stories of the palace are constructed with stone while the upper floors are made of wood and made them prone to fire.

Architecture of Rajwada Palace in Indore: 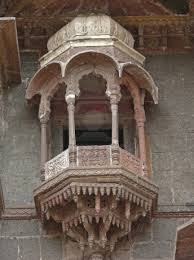 The Rajwada Palace also known as the Old Palace, depicts the blend of architecture of Holkar Dynasty and many other dynasties that ruled India ages ago.

Tourists keep coming to this architectural magnificence that has added attraction like beautiful gardens, fountains and artificial waterfall and many other sculptures of 11th centuries within the palace premises. Located at the center of the city, this palace would leave every spectators just spellbound. The entrance has an arch and has a giant wooden door that is covered with iron studs. After entering through the facade the visitors enter a courtyard that has a Ganesha Hall with a Mughal Arch.

The balconies have Mughal ornamentation. The windows are massive and corridors end up in ornamented rooms.  One part of the palace used to be connected to the other part using vestibules. The three floors starting from the ground floor of this spectacular buildings is constructed with stone but construction of upper floors are done with wood making them fire prone. The hall which was once the venue for royal receptions is now used for arranging different types of exhibitions and concerts of classical musical. 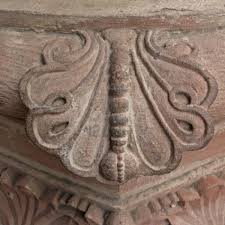 its aesthetic beauty, vivid detailing and splendid aisles and arcades. The area of the palace around the Tulsi Kund got burnt badly during the riots of 1984. The building got rebuilt by H.H Usha Raje Holkar. The new building was designed by renowned architects Shreya Bhargave and Himanshu Dudwadkar based on the 200 years old blue print.

The reconstruction was build exactly the way it was two centuries ago. The construction was done with thin bricks with the mixture of lime mortar and lime plaster. The wooden columns were used with stone bases and flooring is done with rough black basalt.

The courtyard is made with bricks using the old building techniques to give the place an old look. The only change was done was usage of concealed MS pipe frame so that the structure could resist earthquakes as the zone is known as earthquake prone zone.

Timing of Rajwada Palace in Indore:

How to Reach Rajwada Palace in Indore

Unlike Lal Baag Palace Indore, that is located slightly away from the proper city, Rajwada Palace is located in the heart of the Indore City. It is located near M.G. Road, Chhatris, and Main Square, Indore. This place is accessible through Mahatma Gandhi Road and Imli Bazaar Raod using any mode of transport.

Cycle Rickshaw from any nearby location can also be taken to reach here. Indore City can be easily reached by air, road and rail from any part of India. Within the state, there are ample numbers of buses that joins Indore to other cities like Bhopal, Ratlam etc.