Omkareshwar is one of the oldest temples in India dedicated to Lord Shiva, known for its intrinsic religious values. It is one of the Jyotirlinga among the 12 in India. The temple is situated on an Om shaped island in Narmada River, called as Shivapuri or Mandhata. It is positioned at a distance of 77 km from Indore. Omkareshwar is believed to be a self manifested Shiva Lingam. 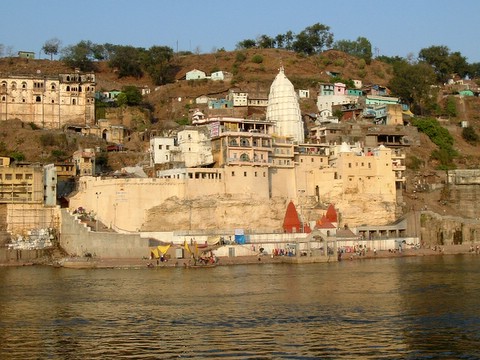 This island is phenomenon of nature, having itself taken a shape of Om symbol which is 2 km wide and 4 km long. Pilgrims comes here throughout the year for the darshan of Omkareshwar Temple. The best time to visit this place is around winter season.

According to Indian mythological belief, Brahma and Vishnu, had an argument on the supremacy of creation, hence Lord Shiva, to resolve this issue, had created three endless pillars and told them to find the end of these pillars. Both Vishnu and Brahma tried but they could not. Lord Vishnu accepted the defeat while Brahma lied that he found the end.

Due to the untruthful nature, Lord Shiva appeared from second light pillar and cursed Brahma that he will not get any place where he will be worshipped while, Vishnu will be worshipped in all parts of world till the end of eternity. This light of pillars are incepted where the Lord Shiva is worshiped hence it is called as Jyotirlinga. There is believed to be 64 Jyotilinga across the country but 12 among them have auspicious values in mythological stories. 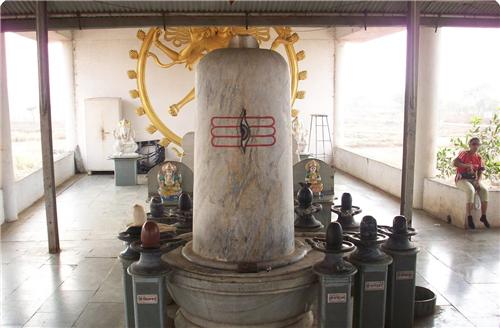 It is one of the oldest temple which has many beliefs of emergence. But the main belief of legends is that Mount Vindhya has prayed to Lord Shiva and worshiped him in form of Parthiv Lingam. Lord emerged here at Omkareshwar and praised the worship of Mount Vindhya, since then it is said that Shiva eternal light remain here only. On the request of Devas, this Linga is split in two parts, formed Omkareshwara and Amareswar or Mamleshwar. Both parted lingas have their temples in Omkareshwar itself. 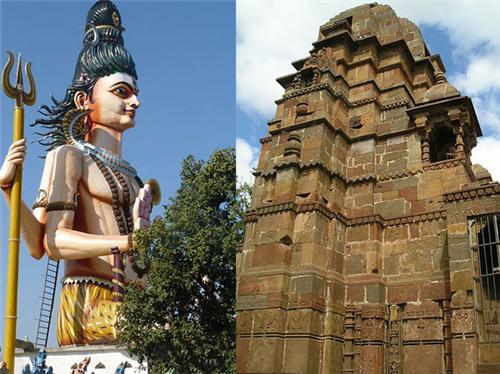 The Omkareshwar Temple the main temple in this area, built in the north Indian style of architecture, having high Spires on top. This is a prominent place for the traveler coming for pilgrimage here. When and how it is constructed, is still under the folds of mystery.

The presiding deity in sanctum sanctorum of this shrine is mounted in an old construction while the dome is made with layers of stone blocks. The extended portion of this temple has rather new construction due to its proximity to Narmada banks on south. This led to one peculiar feature of this temple which is that the deity of this temple is neither in front of the main entrance nor under the tower which was later constructed.

Pujan and Savari at Omkareshwar Temple 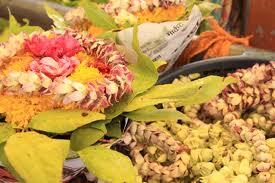 The temple witness huge flow of devotees throughout the days after immersion in Narmada River for the worship of Lord Shiva. People coming for pilgrim perform various abhishieks, anusthans, and special pujas for the salvation.

Temple is visited by hordes of devotees on festive days as well as on Mondays. Every Monday, a procession called as Dola, is taken out with lord Omkar in a Palanquin with all the priests and devotees of temple. This procession is first taken on the Ghat of River Narmada, where prayers are performed and then it takes a round of whole area of Omkareshwar. This event draws lots of people locally as well as from other parts of India. At the time of Shravana month, this Somwar Sawaries (procession) are organized on larger scale to give more grandeur to the occasion.

Festivals and events at Omkareshwar Temple

There are many festivals organized in Omkareshwar, but among these two are prominent, Kartik Festival and Maha Shivratri.

It is organized in the month of Kartik according to Hindu calendar year. This festival includes Panchkoshi yatra which begins at Gomukh Ghat on ekadashi of shukla paksha. This yatra goes through Sanawad, Barwah and closes at Omkareshwar temple on Purnima, the full moon day. A fair of 10 days is organized on this occasion and lots of devotees come to give their presence in this holiest place of India. People from all around India as well as abroad come here on Somvati Amawasya to take a holy dip in Narmada River and darshan of Omkareshwar. 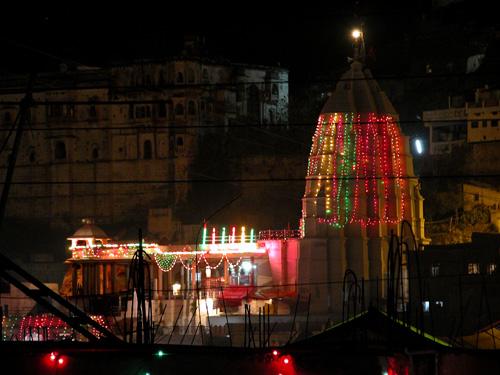 Maha Shivratri is organized in the Falgun Month of Hindu calendar. It is believed that Lord Shiva got married to goddess Parvati on this auspicious day and followers of Hinduism have larger religious values for this day. Special Puja is done on this day and devotees keep fast to show their devotion to Lord Shiva. 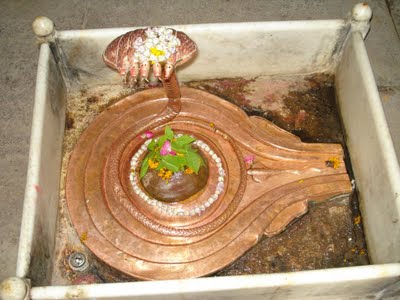 Ghats or Piers near Omkareshwar Temple

Omkareshwar is comprised with lots of Ghats built on the banks of River Narmada. These are one of the most pleasant places in Omkareshwar as silent flowing river and wind breezing above it just mesmerizes the onlookers. Many puja and worships are done here on Ghats and people usually have a dip in clean water of Narmada with belief of attaining salvation. The Main Ghats or Piers in Omkareshwar are:

Prasadalaya is positioned next to Omkareshwar temple managed by trust of temple. Here Khichadi Prasad is distributed to all the Sadhus and holy men at no cost. This is done every morning from 10 AM to 11 AM.

This Prasadalaya is built near the Mamleshwar Bridge to distribute food in form of Prasad to the devotees of Omkareshwar Temple. Visitors can take a coupon of Rs. 10, at Prasadalaya between 8.30 and 10.30 in morning. This food is served from 12.30 to 2.30 in the afternoon. This is highly hygienic and pure food served to devotees.

How to reach Omkareshwar 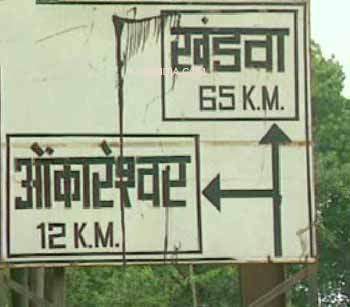 Omkareshwar is located in the central part of India. It is reachable from all the parts of India as well as from foreign countries.


Travelers can easily reach through all the means of transportation to this place. Many state buses and private buses ply between the major cities of Madhya Pradesh and Omkareshwar. Tourists can also hire private taxis or sedan for a visit. State Government has organized special bus services for the tourism of Madhya Pradesh between all the major pilgrims of this state.

Devotees coming by own vehicle have been given ample place for parking their vehicles. To administrate the flow of visitors, parking for all the vehicles are given at specified places. These places include:

Timings of Pujan/ Arti at Omkareshwar

Devotees can visit this shrine all 365 days in a year, there is no such holidays declared for travelers. Doors are open since morning 5 AM till evening 9.35 PM. After that entry is not permissible. The daily activities at Shrine temple are as follows: 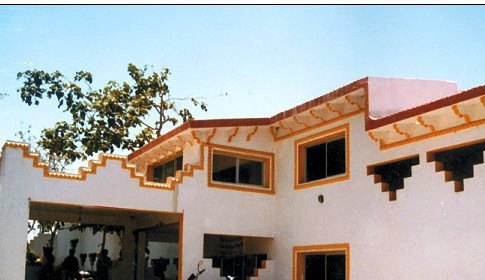 The management has launched online Abhishek Pujan for the devotees who are not able to come to Omkareshwar temple. Those pilgrims should visit their official website and fill one nominal form to give their personal details. The puja done is of different types, including Normal Punanandabhishek, Shiv Mahimn Path and Abhishek, Shiv Mahimn Strot 11 Path by 1 Brahmin, Rudra Path 1 Avartan by 1 Brahmin, Rudra Path 11 Avartan by 1 Brahmin, and Laghu Rudrabhishek. Devotee can make online payment for all these puja performed here.

Other Attractions of Omkareshwar

This is one of the holiest shrines of Omkareshwar, built in the 11th century.

It is a sacred place located at the confluence of two rivers Narmada and Kaveri. It is known for its ancient architecture dating back to 14th - 15th century. 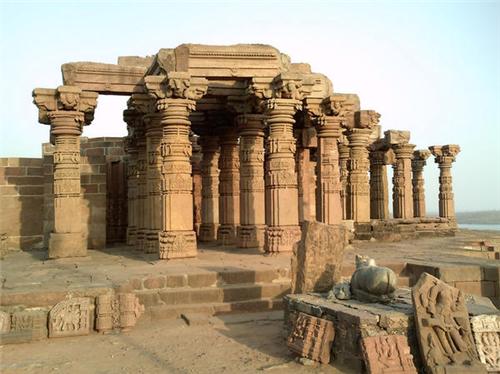 Temple of lord Ganesha having five faces in the entire idol, hence called as Punchmukhi Ganesh.

This is also an important shrine of Omkareshwar temple.

This is one of the most important places of attraction in Omkareshwar. It is believed that sage Shankaracharya had taken all his spiritual education from great sage Govind Bhagwatpad here only.