Indore is a city rich in historical monuments bestowed upon by the Holkar dynasty. The palaces and other architectural marvels of the yester years are really inciting, speaking volumes of the grandeur and magnificence of the monarch age. Hence, people from the neighboring and also far off states make a point not to miss the antecedent contrivances inspiring the viewer for further intricacies in their sphere of work. 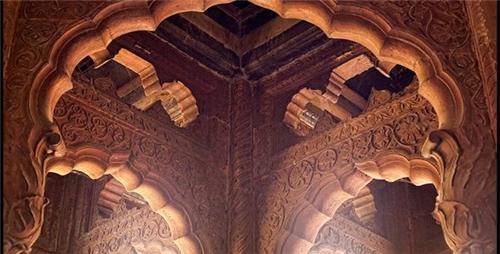 The city derives its name from “Indreshwar Temple” which is one of the renowned temples in the region. There are other temples in the region worthy of visiting for their mind blowing carvings, sculptures, arcades and other architectural detailing. Most palaces houses temples within the complex that are mostly family deities of the royal family. The intransigent and profound nature of the creation of the historical structures put a question on the credibility in the design and manifestation of today’s architectural works around the city.

‘Mini Mumbai’ as the city is adoringly called for its commercial competence; Indore has collaterally conserved and protected all its historical monuments tracing the history with ease. As we step in to the city, the reign and rule of the Maharajas of Holkars is evident from the ingenuity of the citadels around. The much touted historical monuments in Indore renowned for its splendidness are listed below.

Built by Maharaja Shivaji Rao Holkar, it stands on the bank of river Khan. It is three storeyed amidst the gardens and built during 1886-1921 in three phases. The ground floor entrance hall is exclusively made of marble and the palace houses a coin collection in the floor. The exquisite objects of the bygone era adorn the palace which is embellished with beautiful gardens.  The palace venues important events of the city that in turn add-on to the grandeur of the celebration.

The palace is adorned with Indian as well as Italian painting. It is well furnished with Persian carpets, majestic chandeliers, stuffed leopards and tigers, Belgium stained glasses, flying nymphs in the ceiling, greek mythological erections etc. The ballroom is finished in wood with spring attached for a bouncy gait. The kitchen is connected to the palce via under tunnel as it is located on the opposite bank of the river Khan. The gate is gigantic and awesome resembling the gates of the Buckingham palace.

It is seven storied with the lower three storeys made of stone and the upper storeys wood-laden. The palace is magnanimous with fountains, gardens and artificial water fall.  It is divided into two parts. One part is located in the Older part of the city and the other is entrenched in the heart of the city. The palace was cemented by Maharaja Malhar Rao Holkar II and it even houses a temple of Malhari Martand, who is the family deity.  An amalgamation of mughal and Maratha style is evident in its architecture with Mughal arched hall of Ganesha, balconies with Mughal ornamentations. It has a lofty entrance arch with a magnanimous wooden door imparting an absolute royal ambience. 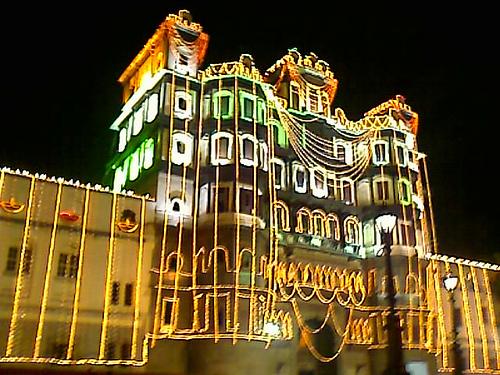 Built in 1766, the palace is rectangular with bastions entrenched in its four corners, which assume cylindrical shape.  The temple has courtyards which is quintessential Maratha style of architecture with arcades and aisles.

Otherwise known as the Indore Museum, the Central museum has collection of objects dated to the prehistoric age. It is very well a feast to the scholars and researchers and to those very much into the civilization of our country. Opened in 1929, Parmar sculptures are the grandstanding feature of the museum created in stone and garbed with ornaments. The museum is divided into Malwa art gallery, Hinglajgarh gallery, numismatic gallery, Antiquity gallery, Arms gallery, Inscription gallery and Gallery of modern art. 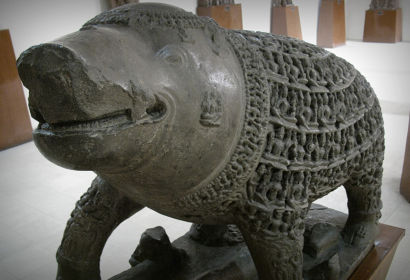 The Jain and Hindu deity sculptures are vividly depicted in the museum, which are garnered form the 11th -12 th Century Hinglajgarh temple ruins, adding to its charm. Sculptures of Shiv, Parvati, saraswati, chamunda, Harihara are beautifully carved out in the museum. Copper plates of Gupta, Paramara and Rajput period, stone inscriptions, coins of gold, silver, copper, Ivory artworks, Italian Marble, china clay are all adornments of the museum.

Timing-  Open on all days except Monday and public holidays. The museum is open from 10am till 5pm.
Entry Fee- Not Required

Erected by the “Cotton King” Seth Hukumchand Seth, the temple is an artistry made of glass and mirror in the early part of 20th century. This Jain temple is also known as Seth Hukumchand Temple. Seth Hukumchand was an industrialist who set out to create a mansion and Kanch mandir in Itwaria bazaar with white stones. But he intended to bloom a wonder inside the temple by incorporating the floor, ceiling, columns and walls of temple with glass and mirrors of multicolors and it followed medieval Jain fashion ornamentation utilizing work-manships from Jaipur, Iran etc. 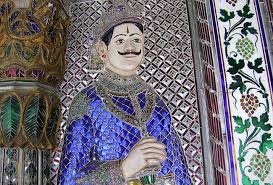 The idol of Thirthankara is stalled at the Garbhagriha and the innumerous panels in the temple depict the ancient Jain stories, Jain thirtha depiction and other historical events. Needless to say, all the Jain festivals are celebrated with absolute ebullience in the Kanch Mandir. Hence, among all the monuments this great masterpiece of the cotton king deserves appreciation and endorsement to view.

Timing - Everyday 6am to 9pm
Entry Fee- Not Required

Revelled by the Holkar rulers as the summer palace, Sukh Niwas palace has an intricate architecture combining both Indian and Western. A tunnel serves as a nexus between the Sukh Niwas palace and the Old palace. The palace is now open to the public to cognize the lifestyle luxuries of the Holkar rulers. Set in the midst of gardens, the palace is sure to bring lots of crowds.

Entrenched on the bank of River Khan, multitudes of cenotaphs, which are the chatthris, the tombs of Holkar rulers present in itself an awesome view with pyramidal spires and Maratha style domes. To add beauty to the whole spell bound endeavour, an artificial lake has been constructed on the banks of the River Khan facilitating boating for the tourists to revel in.

Besides, the gardens and fountains underscore the beauty of the cenotaphs particularly when gleamed with lights during the night. Visitors chose the evening part to sight see the Krishnapura Chattri as it is extra artistic and magnanimous imparted by the magic of lights. 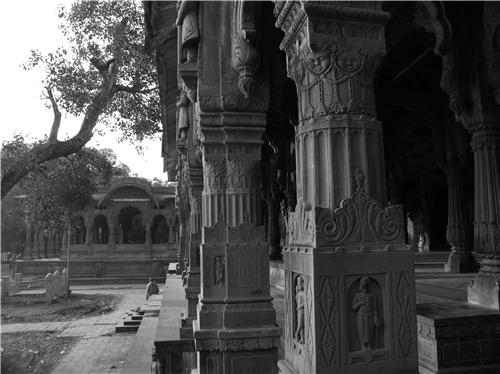 The structure in itself flags the contribution in the design and construction of medieval Indore by the Holkars in the most impeccable and sophisticated fashion to the oomph of the concurrent generation.  While in Indore, the Krishnapura Chatthris is in fact a quaint destination to exhilarate and enjoy.

The palace is built by Gopal Rao, a local engineer, and is a mosaic ingenuity indulging French, Mughal and Maratha architecture. The classic French style pavilion roof is the main fascination of the palace.  Old heirlooms, traditional furniture, chandeliers and four poster beds garb the palace.

Fortified in 1904, the Hall was initially known as King Edward Hall in the pre-independence era but the name was changed to Mahatma Gandhi Hall in 1948 post independence. It is also known as the Town hall.  Built with Seoni stone, the hall has splendid domes and a clock tower in front which is popularly termed as ‘Ghanta Ghar’ which is the main landmark of Indore. An example of Indo-Saracenic architecture, it was envisaged by Sir Charles Frederick Stevens.

The ornamental mouldings and the ceilings which are frescoed are the attributes of the architecture followed by the town hall.  Besides the books, the Hall venues painting exhibition and fairs annually as the place accommodate about 2000 people and are well proportioned to hold such cultural activities inside the hall. Kids’ park for the children to spend the leisurely hour and a temple for the devotees is other accessories garbed in the Town Hall.

Timing- 9am to 6:30pm on all days of the week
Entry Fee- Not required