Khajrana Temple is one of the prime pilgrimages of Indore as well as in India. It is also called as Ganesh Temple which is derived from its idol Lord Ganesh. It was established in 1875 by Rani Ahilya Bai Holkar, the legendary ruler of Holkar dynasty.

It is believed that the idol of Lord Ganesha was kept hidden in well during the year 1735 to safe guard it from Aurangzeb, the ruler of Mughals. So it is quite a historical idol as well and it witness huge flow of devotees around the year.  Lord Ganesha idol here is set with Riddhi and siddhi, the two wives of him in this ancient temple of India visited by popular personalities also.

It was initially present in a small area or small hut but during the course of time, it has developed into a huge temple which in itself is an unbelievable story of this shrine in the city. It is said that deity of temple is made up of Jaggery, Limestone, bricks, and mud brought from the stables of Horses & elephants. 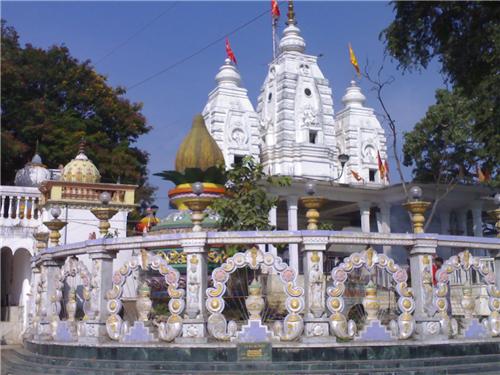 Also, holy soil and water was used to build this divine deity. The frame of idol is made of precious metal which gives it an immaculate look. It is one of the tallest idols of Lord Ganesha which is nearly 8 meters hence the tourists never skip to visit this place due to the wonder attached with its temple as well as the values it behold.

Popularly known for fulfilling wishes of devotees, it is one of the oldest holy shrines of Indore. People having strong belief in strength of god visit this temple not only from India, but also from abroad to worship.  Wednesday and Sundays are the busiest days here as devotees from around the city gather here in huge numbers to offer their prayers to the Lord.

Even during Chaturthi lots of devotees give their presence in this holiest temple of Indore. People pay their respect and pray for riddance of their difficulties as it is believed that Lord Ganesha is the god of goodness. 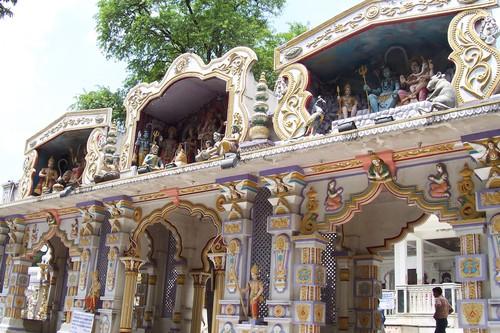 Khajrana temple has undergone many changes from its inception. The main entrance and walls of main shrine garbhagriha is made of silver depicting the festive celebration impressed through crafting of sculptures on these walls.

The eyes of Idol are made of diamonds which were donated by one of the devotees of this holy shrine. People visiting this place donate lots of gold, diamonds, and precious stone as well as money to show their gratefulness to lord Ganesha.

The temple holds many other deities as well, including Shirdi Sai Baba, Radha Krishna, Lord Shiva, Santoshi Maa, Shani Maharaj, Lord Rama, and more. Please ensure that you have more time to explore this place thoroughly.

How to reach Khajrana Temple

Khajrana Temple is well connected with the city and transport facilities are easily available from prominent areas like Palasia and Rajwada. All means of transportation are available such as auto rickshaw, vans, and shared taxis. If you go with own vehicle then also it is quite comfortably accessible and ample parking space is provided to its visitors by the temple authorities.

Khajrana temple can be visited all through the year without any disturbance. The gates are open for darshan from morning 5 PM to 12 noon and again in evening, it is open for its visitors from 4 PM to 8 PM.

There is no such holiday declared for the temple and its timings are expandable at the time of festivals such as Ganesh Chaturthi. It is advisable to reach before 1.30 because after that the Prashad counters get closed. There is no entry fee.

Here are a few Hotels near the Khajrana Temple of Indore:

Here are a few Restaurants near the Khajrana Temple: