Indore is located on the Malwa plateau of Madhya Pradesh. Indore being the commercial capital and the main industrial hub of Madhya Pradesh gets hundreds of visitors who come here for various purposes. Whether visitors come to Indore for business or for leisure trip, many of them prefer to take flights from Indore.

Indore has direct flights from the cities like Delhi, Mumbai, Chennai, Bangalore, Kolkata, Hyderabad, Ahmedabad and others. International flights to Bangkok, Kuala Lumpur and Sharjah are also available from Indore airport on regular basis. Hajj Charters also fly from this airport since 2008 during Hajj season.

In the year 1935,The Holkar State Administration had chosen a site for construction of airport after there was a discussion with Mr. Nevill Vintcent of M/s Tata and Sons. The site that was named as Bijasen had the airport constructed and flights from Indore to other cities like Mumbai, Delhi and Gwalior started from here in the year 1948.

The Entrance of Indore Airport

This airport was handed over to the Government of India in the year 1950 according to the Central Financial Integration Scheme. A new runaway of 5600 ft was constructed in 1966 and the total cost was Rs 15 lakhs. Night landing is also possible in this airport.

There are two terminals at Indore airport:

Terminal 1 is the domestic terminal. The terminal is equipped with modern facilities like escalators, advanced baggage handling system. There are two lifts located in this terminal. From here many domestic flights to different other cities and town of India is available.

Terminal 2 is the cargo terminal. There are huge warehouses and other facilities available in this terminal. Foolproof security measures are also incorporated for the passengers and various products.

The new expandable terminal of Indore airport was started in 2012. It has the capacity of handling about 700 passengers every hour. The new terminal comes with high-tech escalators and advanced baggage handling system. There will be16 immigration counters as well as 16 check-in counters in this terminal. Huge numbers of CCTV and X-ray machines will be there for security.

Indore Airport has been ranked the 2nd position in National Structural Steel Design and Construction which was organized by Institute for Steel Development Growth.

The total area on which Indore Airport is built is about 729 acres. The total area of the current terminal building is about 18,000 sq meters. The airport has concrete parking bays that could keep 5 ATR-72, 4 Airbus A-321 and 3 Boeing 737 Aircraft at a time. The runway of Indore airport is 2750 in length and 45 meters in width.

Airlines and Flights from Indore Airport

Airlines that have flights to and from Indore Airport are: 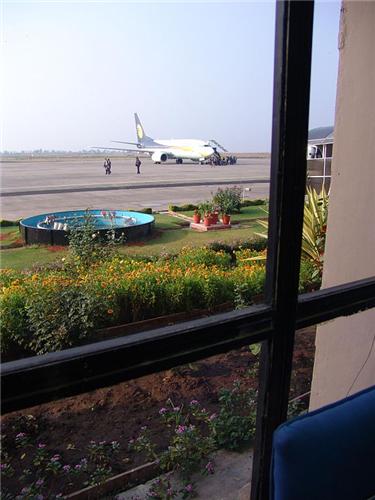 View of the Indore Airport's Runway

Indore Airport is equipped with many facilities listed below:

Airport has free baggage services and special facility is given for senior citizens as well as disabled people. Trolleys as well as wheel chairs are provided for them. Different types of shops like cafes, bakery, restaurants, jewelry shops etc are there to allow passengers to buy stuffs at reasonable rate. Duty free shops are also available at Indore Airport.


How to Reach Indore City from Indore Airport

Airport Passengers can get various means of conveyance outside the Indore Airport to reach various parts of Indore City. Some of them are as follows:

By Bus:
Outside the terminal there is a bus stand located on the aerodrome roads. Numerous buses plying to different parts of the city can be available here. Pre-paid taxi book is located near Aerodrome Road.

By Taxis:
Taxis can be hired from this booth to reach various parts of the city.

By Rickshaw:
People can even take auto rickshaw from outside the airport to reach the city. The distance of Indore


Other Airports near Indore Airport: